​Second is the Catpole (Ichthyorana siluroides), an aquatic creature descended from the Marsh Frog (Pelophylax ridibundus). Time had rendered it into a fish-like creature, a perpetual tadpole that could breed without ever metamorphosing. It also appears somewhat fish-like in the specifics of its tail and hind limbs.
​
​From this we get the Paramphibia and the Icthyogyrinia. Diverging early, these 2 groups are quite different. Paramphibia have regained the ability to metamorphose, their limbs and ears convergently resemble those of typical Lissamphibians, though their evolution was circuitous. Some forms climb, some forms hop or amble or crawl, and some dig, but none have regained the ability to grow forelimbs (which was long lost in its ancestral form).
​
Ichthyogyrinia (also called Fishpoles) more greatly resemble their ancestor, filling the role once taken by fish, sharks, whales and baitfish. Most forms have a powerful caudal fin and fin-like hind limbs, though jaw mechanisms vary considerably. Some kinds have large plated jaws covered with a horny sheath, while others have actual teeth. The most primitive forms simply resemble wriggling tadpoles, complete with branching gills, and it is these kinds which form the ubiquitous zooplankton in the oceans, much like krill or small baitfish would on earth.

Both Paramphibia and Icthyogyrinia rely on water in order to spawn and nurture their eggs. Many fishpoles lay large swaths of hundreds or thousands of eggs.
​​
Faunal Sample -​​
Ichthyogyrinia

​In freshwater too, fishpoles take the niches that were once taken by true fish. The Eelpoles (genus Anguillogyrinus) are common predators in rivers and lakes, lurking amongst aquatic vegetation or snags, in order to snatch smaller prey. Species vary from 70 centimetres to 2.5 meters long. This species is distinct in having true teeth, as opposed to mouthparts made of keratin.
​

Paedomorphosis exists in an extreme in one group of Icthyogyrinia, the Pollychovies (family Planktogyrinidae). These tiny amphibians resemble nothing more than young tadpoles, but have fairly well developed jaws. Pollychovies occur in great swarms of thousands or millions throughout the oceans, and feed mostly on other forms of plankton. They form a great part of the diets of filter-feeders such as Whaple, as well as many small predatory worms and arthropods. 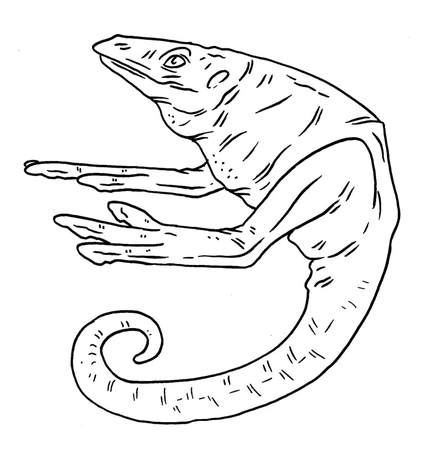 ​Treeclingers (genus Ambicauda) are common in tropical jungles, species range in size from as long as a finger to bigger than your hand. They are agile predators that act in some ways like tree-frogs, being able to leap from branch to branch. In place of forelimbs they have a long prehensile tail that, like their toes, is covered in adhesive mucus. Usually they sit in wait for smaller creatures to happen past, snatching them with their large frog-like tongues, bearing keratinous barbs.
​ 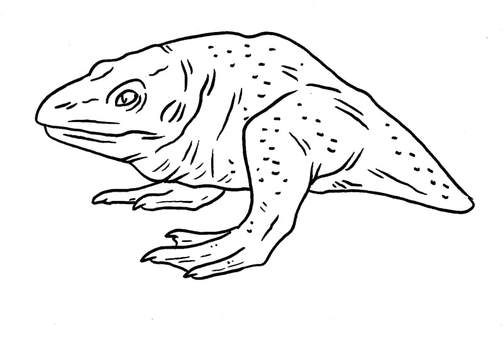 ​Clawed Boads (genus Bufobipes) are thick-skinned, toad-sized amphibians that generally prefer to stay on land, as long as their skin remains damp. Unlike true toads, they most often amble and walk about on well-developed feet, only hopping in order to launch themselves onto their prey. They feed mainly on arthropods, worms and other amphibians.
​

Froggodiles (genus Tyrannogyrinus) are a kind of aquatic ambush predator, existing as a few similar, wide ranging species that can reach large sizes (up to 3.5 meters long). They behave in many ways like crocodiles or prehistoric temnosponyls, capturing land-based prey from ambush, and sometimes consuming aquatic prey also. Their jaws are lined with true teeth, and are strong enough to pierce hide and muscle.

Caudamanders are a large and diverse family (Caudogyrinidae). Most of them are small terrestrial crawlers that inhabit damp patches of undergrowth or leaf litter, much as a salamander would. They pull themselves forward with their small feet, and also push themselves somewhat with their long tail. Diet generally consists of small arthropods and worms.

Fruggles (genus Talpagyrinus) are almost completely subterranean amphibians that feed on worms and testate amoeba. They dig with their powerful limbs, pushing themselves through the soil as they scrape it away and compact it to either side. Most species are small enough to fit in the palm of your hand. Spawning occurs during heavy rain, usually in large puddles that wash into temporary watercourses.